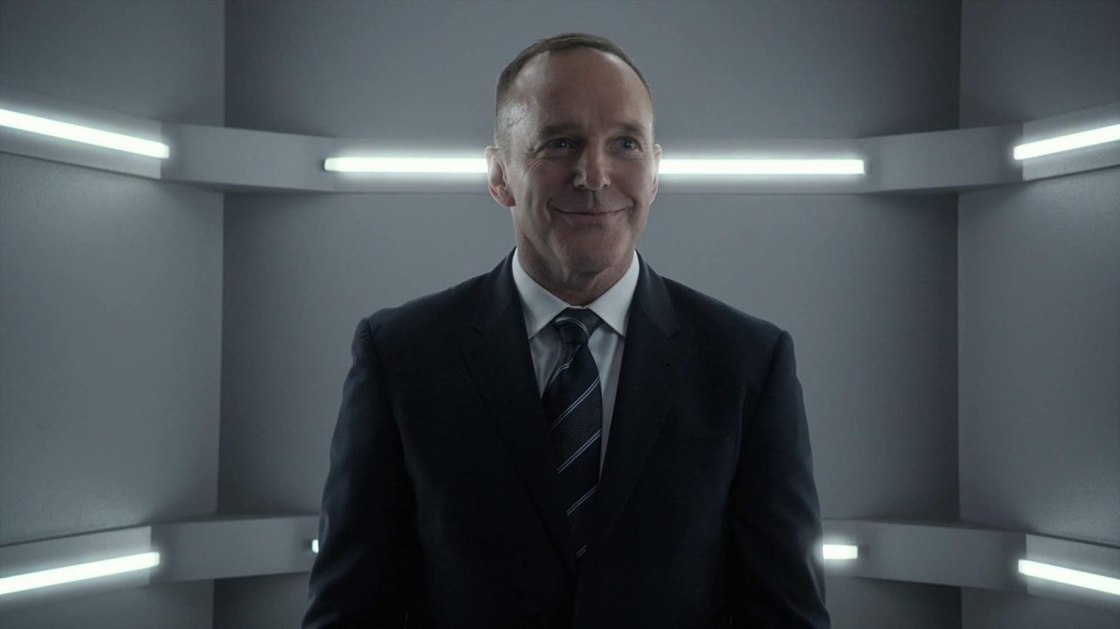 For seven years now, myself and millions of others have been right beside Coulson and his team as they have battled aliens, discovered new earths and different dimensions, fighting to save the day, one mission at a time. Rooting for these characters, we’ve experienced the betrayal, the hurt and the pain, the laughter and the fun right alongside them. For seven years. And now, the day has officially come where we say a sad goodbye to the S.H.I.E.L.D. family as they put away their guns, their axes, their tech to live a normal life.

In true S.H.I.E.L.D. fashion, the final season gives us everything we’ve ever wanted from the show – giant space battles, massive alien ships, shaking explosions from Quake and others, comedy, family and love before inevitably ending with a big bang. One of the defining moments of the season, though, has to be the distinct music and costumes. Travelling back in time for a final fight against the Chronicoms, the cast see themselves in numerous periods, from the 30’s to the 80’s, altering the course of history. And with it, we get some of the most iconic outfits on the show and even a few familiar faces…

Yes, that’s right. Season 7 saw fan-favourite Daniel Sousa, best known for his role in MARVEL’s Agent Carter join the team. And boy, was this one of the best decisions of the season. A dependable, enjoyable addition to the family, Sousa provides comedy with his distinct lack of knowledge for futuristic technology, fun and entertainment, bad-ass fighting skills with a brand new leg and even a little bit of love too. It’s a relief that after 6 seasons, the seventh and final season gives Daisy an endearing, trustful and mutual respecting relationship. Sousa is a loyal man who will stick by her throughout all her crazy missions, doing absolutely anything for her and it’s incredibly refreshing to watch. If anything, I really wish Sousa was in the show earlier for this pair to get the air-time they deserve. He fits so easily that it’s almost crazy for me how much I see him as part of the family.

In addition to Sousa, this season continued to develop it’s exceptional characters we have all grown attached to. We see Daisy finally accepting who she is and who her family are, willing to sacrifice herself for those she loves – that one line “I already have a sister. Her name is Jemma Simmons” really did break my heart. Yo-Yo spends the season undergoing a crisis of conscience, doubting herself and her abilities while Mack almost throws away his mission before realising the mission is who he is. Even May, the calvary, after so many years, finally confronts her feelings, impulsively hugging Daisy in the epic finale.

It is then we realise that at its heart, no matter what wild mission the team are on, no matter the all-powerful villain, the cast and their chemistry is the shows heart and soul. They have been through so much together, they have developed, they have changed. Some have even died, some are now robots but they’ve been through it as a family. Family is what Agents of S.H.I.E.L.D. is all about and season 7 is no different – they may not be the reason I started this show, but they are the reason I’ve stayed for 7 long years. The sacrifices, the reunions, the redemptions – they are the heart, the soul, the excellence.

However, despite the excellent character arcs, there are faults to the final season. Dealing with time travel is always risky – it can easily get very confusing. Trust me, I’ve watched my fair share of time-travel tropes. And despite being sci-fi in nature, it is the time-travelling that falls short this season. Even the most hardcore time travel fanatics would have trouble piecing together the team’s struggle to return to the original timeline. At one point, I think I actually gave up trying to understand it and just enjoyed the moments.

The show also relies on our knowledge of previous characters, previous plotlines, previous villains for the nostalgia to be effective. However, some of the settings (the temple?), the characters were so distinctly blocked out of my mind from the last 7 years that the whole impact of such references to the past were lost on me. However, I did quite enjoy the artifacts in the finale, reminding me of a simpler, easier time from season 1. And when the puzzle pieces finally do slip into place with the return of Fitz (I missed you!), the long explanation of what everything now means, how it all makes sense loses its power. It’s like someone is telling you what happened rather than showing you. Always show, don’t tell.

Yet, despite this, it is incredibly hard to produce an ending to a show that has so many plots, so many characters and so many devoted fans. And all be it so, season 7 does an excellent job, wrapping things up while also leaving the door slightly ajar. Despite the terrible treatment from Marvel and the ABC these last 7 years, the final season is memorable with an incredibly bitter sweet, happy ending (the reveal of Alya had me leaking from the eyes – my favourite characters are finally parents!).

As we watch the team leave the digital reunion, move on with their lives, we realise that this is the end. As these characters have become better versions, wiser, smarter and powerful versions of themselves, we cry a little and accept that this is the end of an era. And while season seven doesn’t rank among the best series efforts, S.H.I.E.L.D. ends in a way that we can accept, we can love and we can remember.

In the wise words of Coulson, “Here’s to us. Who’s like us? Damn few.”

(If you made it this far, let me know in the comments :). Thank you – this is a long love letter and I have no regrets).