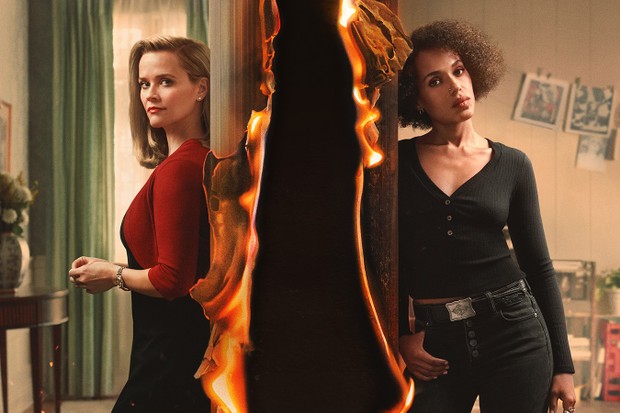 Little Fires Everywhere is an eight-part adaptation of Celeste Ng’s acclaimed novel about motherhood, produced by and starring Reese Witherspoon and Kerry Washington. Set in the late 1990s, in Shaker Heights, Ohio, an idyllic archetypal wealthy American suburb where appearance and reputation are paramount, the show follows Elena Richardson and her family and Mia Warren and her daughter as they struggle to cope with decisions they made in their past.

Starting with the mystery that drives the show as Elena Richardson watches her mansion go up in flames, the show backtracks four months to unravel the secrets slowly, but with just the right amount of drama to keep you intrigued. While many different things happen within the show; the complicated relationship drama between the younger generation, Izzy’s struggle to accept her identity and find her place in society, Pearl’s desire for more than one wall and an actual life in Shaker Heights. There’s even a plotline following an illegal immigrant who left her infant by a fire station in a poverty-driven postpartum crisis as she seeks to get custody of her daughter from an infertile mother, seeking to finalise the adoption of said child and not lose another chance to fill the mother role she so desperately wishes to fulfil.

Little Fires Everywhere is about the choices mothers make, the privileges and opportunities they can or cannot provide, the secrets they keep

However, when it comes down to it, the show’s focus is on Mia and Elena and their difference of opinions on race and privilege, their different codes as mothers and their obsessive crusades against each other. The show contrasts these two mothers; one who is organised, wealthy and another who is an artist, making something of herself one day at a time, moving regularly to avoid the reveal of her secret.

Because that is also what Little Fires Everywhere is all about: secrets. The second half of the series explores the past of these characters and why each woman is the way they are and the secrets each are keeping. Even the younger generation have their secrets. Little Fires Everywhere is about the choices mothers make, the privileges and opportunities they can or cannot provide, the secrets they keep, the control they desire to have over their children and their lives and increasingly, as these children grow older, cannot have.

At times, this show is very predictable and you can see what’s coming from a mile off. It also throws a lot of themes at viewers such as sexuality, motherhood and abortion and the many issues of race, so much so that it almost seems chaotic at times, with some characters remaining very undeveloped. I really could have had a few episodes developing Tripp, Moody and Lexi’s characters further.

The leads on the other hand, are well cast with Washington bringing out scars and pain of Mia’s character perfectly. Witherspoon excellently portrays the obnoxious priggish nature of Elena’s character, I never once felt sympathy for her character and it worked.

Little Fires Everywhere is incredibly addictive, interesting and intriguing, leaving viewers thinking what is going to happen next. The ending happily uncovers all the drama alongside who set the fire and personally, I was happily satisfied. Although I do have a lot of questions – what happened to Izzy, is she okay?