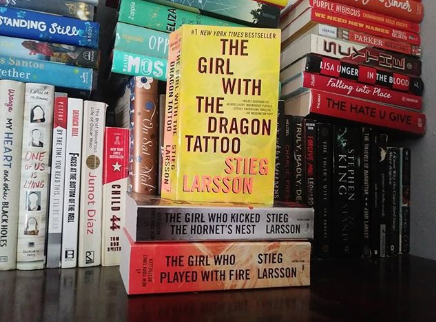 Review: The Girl with the Dragon Tattoo (Millennium #1)

Harriet Vanger, a member of one of Sweden’s wealthiest families disappeared over forty years ago. Her uncle still seeks to find out the truth. When Mikael Blomkvist, a journalist is seen to have a lot more time on his hands after a libel conviction, he is hired to investigate, with the added bonus that the Vanger corporation has the truth Blomkvist needs to save his company and restore his reputation. He is aided by the best Private Investigator there is, Lisbeth Salander. Together, they discover more than just what happened to Harriet, uncovering the Vanger family’s darkest and deepest secrets. The Girl with the Dragon Tattoo combines murder mystery, family saga, love story and financial ruin into one complex but extremely intriguing and entertaining novel.

The Girl with the Dragon Tattoo has often been criticised for having a bit too many plots and that is totally understandable. This book has a LOT going on from shady business dealings, corporate fraud, murder, religious fanaticism, Nazi’s, casual sex, creepy perverts, violence against women and sexual sadism with a spicy side of dysfunctional family secrets and money laundering. But, despite this, Larsson does a brilliant job of exploring deeply into each theme, digging deep into the plot and revealing detail after detail that at times my head even started spinning. I wasn’t expecting to be sucked in so quickly and feel so deeply for the characters in this book.

I also find it interesting that the title of the novel was changed when released in English. The original, Swedish title, Men Who Hate Women is a much more fitting title. Because when it comes down to it, this book is filled to the brim with men who hate women. I especially liked the enlightening facts about women in Sweden on the beginning of each ‘Part’. However, while this book is filled with men who are constantly sexually abusing and violating women, there is one exception. Our hero, Mikael Blomkvist. Possibly my favourite character in the book, Mikael is a bad dad and he has a failed marriage and many questionable sexual relationships (why did he even get with Cecilia?). He makes decisions that challenge his ethics but when it comes down to it, he’s a good guy who tries to do well in an ugly world. He also has an insanely comical sense of humour that even Lisbeth couldn’t resist him. He cares about all the people in his life, both male and female.

Salander’s character, too, is intriguing. She is smart, she is an outcast, she stands for women to fight back against their oppressors, she is misunderstood. I especially liked the scene when she saved Blomkvist, all heroic but violent, defining her character as the true hero who can handle herself and get some real credit for it. Salander is ice cold, made to seem like she doesn’t care about anything that may interfere with her principles but at the same time she is fire, caring about everything but never speaking up about it. She was an incredibly refreshing and satisfying character to read about.

I also really enjoyed how symmetrical this book is, starting and ending with Blomkvist’s corporate corruption story but also in the way it shows how men and women are subjected to violence. The juxtaposition of Salander’s rape with Blomkvist’s consensual sexual counter with Cecilia was expertly done and really well played out. It is grotesque in contrast, highlighting the important theme of consent. Salander’s rape, in particular, was physically difficult for me to read that I had to put down the book, a sign of how smart and effective the writing was to begin with.

However, I did not enjoy how it isn’t really until the middle of the book that Salander and Blomkvist meet and that Salander was reduced only to a few scenes. The book also gave me such a hard time – I was extremely confused to begin with, I was even bored for the first few chapters. But, once it got down to the drama and the action and Pippi Longstocking and Kalle Blomkvist came together to create the baddest Swedish detective dream team I’ve ever seen, I couldn’t stop reading as The Girl with the Dragon Tattoo slowly crept into my heart.

The Girl with the Dragon Tattoo deserves a lot of the hype it gets and while you may be sceptical, I recommend reading it and really giving it the attention it deserves because it will leave you enthralled, desperate to read the next book (which I sadly don’t own).