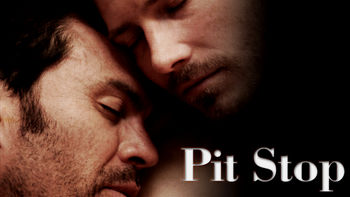 For June 2019, aka Pride Month, I decided that I would dedicate each day to watching an LGBTQ+ film. By the end of the month I’ll have watched hopefully 30 films that I’ve been meaning to watch since forever but always say “oh, that can wait another day” because we all know how terrible LGBTQ+ films can be. So, kicking off the 1st June was Pit Stop (2013), directed by Yen Tan and starring Bailey Bass, Marcus DeAnda and Yesenia Garcia.

This film tells the story of two mid-thirtyish gay men, Gabe and Ernesto yearning for love and emotional fulfilment while struggling with daily life and past relationships. It’s a story of people finding their way in life and love. And to sum it up perfectly: it was a load of pointless garbage. I honestly felt like that man Gabe takes to the theatres toward the end of the film: snoring and unable to keep my eyes open throughout the whole film.

This film is slow, badly written and really pointless. It contains very LONG silences and the action could have been speeded along in many easy ways. Why on earth did I have to wait an hour into a 80 minute movie for the main characters to meet only for them to have sex and then the credits role? The poster and summary was entirely misleading. I spent the whole film waiting for something dramatic to happen, waiting for ANYTHING to pick up the pace and then before I know it, it’s finished and all I took was the pain I felt watching it. This is a film that will not go down in any history of LGBT movie-making.

Also, can we talk about how Shannon (was that her name? that or Janet I honestly couldn’t care) and Winston’s sex scene was longer and more intimate that any of the gay couples sex scene? This is the most common error in most LGBT movies. I don’t care about heterosexual love, I’m here for the gay. If I wanted an embarrassing fumbling heterosexual sex scene I’d go watch a film starring Ryan Gosling or some other typical romcom actor. It was at this point that I wasn’t even mad, just disappointed with the film.

I spent 80 minutes of my life watching two regular gay men navigate themselves through life only to have a fling at the end of the movie. Nothing exciting happens and this was a bad start to pride month. I wish I could give a more positive review I really do but the whole experience was disappointing and pointless. Do NOT watch this film.